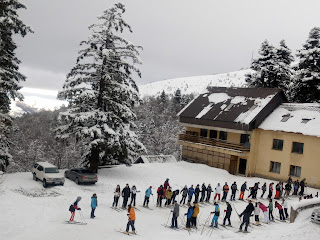 ‘Travelers Insight’ -a travel blog of Munich Airport has dedicated an article to Pristina, the capital of Kosovo. The author Matthias Derhake writes about his tour in Pristina which was offered by Kosovo Holidays, a Destination Management and Tour operator company in Pristina . Derhake is impressed by the culture in Pristina, by the positive vibe of young people who live and study in the capital. “Pristina is moving. You can really feel the updraft pulling through the streets.”

You will be surprised by the culinary in Pristina: “Whoever strolls down the city promenade from Skanderbeg Square - this is where the theater is located - should do so on an empty stomach. Because here are numerous stalls with Albanian, oriental and international delicacies. Especially between April and October, this food mile is a real culinary highlight.
Read more about his trip below in English, or the original article in Dutch.

Visit to Pristina - departure mood and coffee culture
In the youngest country of Europe proportionately, most young people live, much of them in Pristina. On the one hand, the city with its old buildings still has the Yugoslavian charm, on the other hand, one encounters more and more hip and modern cafes, theater and art.
People in the Balkans are passionate coffee drinkers, as you can see in Pristina. Many politicians and members of parliament are attracted to this because the seat of government of Kosovo is right around the corner.
If you like to work on a laptop or mix with the locals, you should make yourself comfortable in the Soma Book Station , which by the way is run by a cat. Well, not quite. The cat belongs to the owner. She spends most of the day in the café and is very sociable with the guests. Also recommended are the Cup o Tea, Tartines , Tiffany , MIQT Pub , Kadare Bar Books and the Mana Board Game Bar, which offers a wide variety of board games for their guests.

Interpretation desired - the National Library of Kosovo
Pristina is not too big, the city center can be explored on foot. Here you will also find the most beautiful buildings, attractions, museums and mosques.
Among the most impressive sights in Pristina I would count the National Library of Kosovo, which was unfortunately named by the English Telegraph as one of the ugliest buildings in the world and located on the campus of the University. Nonetheless, it is the most visited attraction in Kosovo. There are many different and controversial interpretations about the symbolic meaning of the 99 white, glass domes with the large grid-like metal net. If you're traveling to Pristina, you can find out about what the Serbs and Albanians are discussing here as part of the Kosovo Holidays Walking Tour
A few meters away is the Mother Teresa Cathedral. Muslims and Christians live peacefully together in Kosovo and have been for a long time. For one euro, my tour guide Armend and I take the elevator up the cathedral. From the top you have a breathtaking view over the city and the nearby mountains.

Pristina's story - shocking, but with a happy ending
The history of the country is reflected in almost all the sights of the city. So also on the Ibrahim Rugova, the Skanderbeg Square and the  National Museum of Kosovo. While finds of early history are shown on the ground floor of the museum, on the first floor you will find the very interesting but also disturbing exhibition on the Kosovo War from 1998 to 1999.
After a 60-minute history lesson, it's time to go outside again. Actually, I'm more of an outdoor and nature lover, but the story of the collapse of the former Yugoslavia has captivated me so much that I try to go to any museum and talk to people about it as soon as I'm in the area.
Right next to the museum is the Great Mosque of Pristina. Armend begs me in, we take off the shoes before. A very warm, peaceful and above all welcoming atmosphere surrounds us.
Bonding with the West - Bill Clinton and the Symbolic Lego Stone
So many impressions and information. And we were not even in the city center. The large yellow Lego stone on Ibrahim Rugova Square symbolizes not only the six regions of Kosovo, but is also seen as a missing puzzle or Lego piece of the EU.
Kosovo is pro EU and America, as the UN and some big politicians strongly supported the Kosovars during the war. As a sign of their attachment, they not only created Bill Clinton Avenue, but also erected a statue in honor of the former US president. Many parents have called their sons Bill or Bill Clinton. I had to ask twice when I heard that.
From Suxhuk to Kifle - Pristina's culinary surprises
Whoever strolls down the city promenade from Skanderbeg Square - this is where the theater is located - should do so on an empty stomach. Because here are numerous stalls with Albanian, oriental and international delicacies. Especially between April and October, this food mile is a real culinary highlight.

On the huge bazaar Armend shows me the hidden alleys and the traders, who besides fruits, vegetables and textiles also offer oriental delicacies, spices and traditional garments. Anyone who wants to buy something here should definitely negotiate or have a local with them, as communication problems can arise.

#NewBornMonument - Pristina's creative monument
At the southern end of the promenade you suddenly find yourself in front of a monument that you want to revisit every year once you've been in Pristina: The NewBorn Monument is redesigned annually by the creative minds of the city, so it always looks different - but always full of meaning and inspiration!
If you do not have time to visit Pristina every year, check the Instagram #NewBornMonument hashtag or the NewBorn Monument Pristina hashtag. Last year, the monument contained the message "No Walls" and this year the country's tenth anniversary. I am very curious to see what next year will be like.