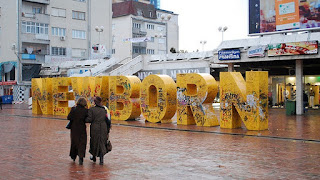 Getting There
Because Serbia does not recognize Kosovo’s independence, travel for people without national ID cards, like most American passport holders, can be tricky. If you enter Kosovo from Serbia and wish to return to Serbia, this should be no problem. However, if you fly directly into Kosovo, or enter via another country like Albania or Macedonia, Serbia will not admit you. Just something to take into consideration when planning a trip.
at 5:30:00 AM No comments: