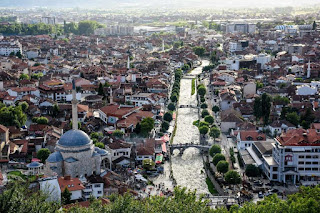 Kosovo Holidays, is a reputable and efficient English-speaking tour operator offering group and custom trips for activities from outdoor adventures and Bosnian village lunches to cultural city and wine-tasting visits throughout Kosovo, Margo Pleiff wrote for San Francisco Chronicle.
She had an adventurous experience in Kosovo and shared her impressions of this trip with others in the article tittled: "Europe’s youngest nation, Kosovo is full of surprises"

"It is hard to believe that Kosovo is the youngest nation in Europe, of 8 years old, and the numbers of visitors who come to Kosovo are increasing every year. We explored this beautiful country together with Kosovo Holidays tour guide, Arsim Rexhepi", she said.

Margo finds Kosovo full of surprises as she gets to know the wild beauty of the mountains and the old city of Prizren. She has seen a lot of fascinating sites of Kosovo and definitely says a lot of things in her article.


Find out the adventure experience of Margo Pleiff in Kosovo:
“For all the highly visible strife of the 1990s, Kosovo turns out to be a safe, diverse, wildly beautiful and inexpensive English-speaking destination with good roads, hotels and restaurants. National parks make up 11 percent of the land area with scenic, accessible mountain terrain.

There are traditional mountain villages and UNESCO cultural icons, including 13th century monasteries. Rarely visited even by Western Europeans who flock to nearby Croatia, it’s also still charmingly unpretentious and welcoming. And, as I said, they love Americans like no other place I’ve ever been. The landmark 16th century Old Stone Bridge arches elegantly over the Bistrica River. I visit the 1615 Sinan Pasha Mosque and Kosovo’s grand UNESCO-protected 14th century Our Lady of Ljeviš Orthodox Church. In the well-preserved Ottoman quarter, Turkish is spoken by one of the country’s many minorities that also include Bosniaks, Serbs, Roma and Ashkalia. Walking up a steep pathway to the castle encircling a hilltop overlooking Prizren, there are great views of the city, with its more than 20 mosque spires pointing heavenward. Spinning around, I watch pink sunset rays lighting up the snow-capped peaks of the Sharr mountain range. In the morning, hiking guide Edis Krusha drives us up a canyon road, zigzagging through forest and past hilltop castle ruins toward those mountains. After 90 minutes, we arrive at Prevalla, in winter a small ski center at 5,000 feet, and lace up our boots as a young shepherd urges a herd of sheep past us toward summer pastures.

Hiking up the flank of one of the Sharr’s highest peaks, 8,559-foot Bistra, we cross alpine meadows blazing with wild orange crocuses and set up a picnic alongside a bubbling spring with views of valleys and snowy peaks. Bistra is on the Via Dinarica route, a 1,200-mile hiking trail crossing eight Western Balkan countries. It was named Outside magazine’s best new trail for 2014.