Nat Geo Traveler in an adventurous tour to Kosovo

The new state of Kosovo is remarkable for its beautiful nature and cultural heritage. Some of the best travel magazines are writing about this new born destination. But this time the hospitality of Kosovo has impressed the writer and traveler of Nat Geo Traveler. She starts her route from Montenegro border with Kosovo. Here is how she is describing her tour to Kosovo:

“What does a landmine look like anyway?” I suddenly wondered, as I freewheeled down the Cakor Pass into the canyons of Kosovo. I’d read all the warnings. Stick to the road. Avoid camping anywhere that hasn’t obviously been grazed in the last 10 years. Don’t approach suspicious devices. But I had no idea what qualified as a ‘device’, or what might make it ‘suspicious’. 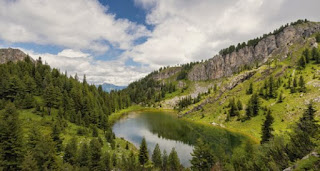 I hadn’t seen another human being the whole afternoon — since, in fact, I’d turned off the main route in Montenegro and followed this narrow lane up into the mountains. Not a single car had passed me. I wondered if they knew something I didn’t, fretting about landmines and roadblocks and kidnappings as I slowly climbed up above the treeline, gazing back at mountaintops that had towered over me the previous day, and sweating steadily in the late autumn sunshine, that morning’s frozen fingers and steaming breath already a distant memory.
So, I’d entered Kosovo through the back door. No border guards; no passport stamps; no one even knew I was here. Shaking with nervousness, excitement and exhaustion, I followed the river, watching the sunlight retreat to the tops of the surrounding cliffs, and wondering what I’d do when darkness fell. Camping was a bad idea in landmine country and Peje was several hours’ ride away. Eventually, the gorge opened out, and down on the floodplain I spotted what must be a resort: a large building surrounded by log cabins, with an encouraging plume of smoke emanating from the chimney.
The place was deserted save for the owner, an elderly man in a flat cap, and a teenage waiter, who translated our exchange. Of course I could camp here. Anywhere I wanted. The old man swept his hand in a wide arc to indicate that what was his was now mine. Then another brief conference in Albanian.
“My boss, he is worried you will be too cold,” said the teenage waiter. “He will give you a room for free.” And so that there could be no doubt about it: “Gratis. No money.”
Tears came into my eyes as I thanked the owner in every language I could think of and shook his hand. Within five minutes my bicycle was locked safely in a barn and I was standing in the doorway of a large, clean, hotel room. Within half an hour, I was watching as five days of sweat and grime swirled down the plug hole. Soon after, I crawled into the big bed, stretched myself out to all four corners, and fell asleep with the feeling of cotton on my clean skin.

See full article: http://www.natgeotraveller.co.uk/destinations/europe/kosovo/kosovo-treading-carefully
at 4:17:00 AM No comments: