Kosovo people had some good news to celebrate this month. First news was the decision of UEFA (European soccer’s governing body) to accept the Kosovo Football Federation as its 55th member in a vote at its annual congress in Budapest.  Just one day after the new Balkan country became part of UEFA, the European Commission proposes visa-free travel for the people of Kosovo. 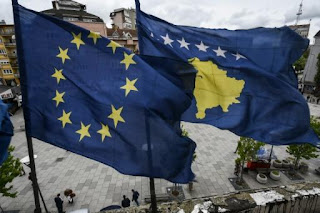 The European Union had been wary about offering Kosovo a visa-free regime after large numbers of Kosovars sought asylum in the bloc in 2014 and 2015. But Kosovo has improved border controls, introduced biometric passports and agreed to the return of citizens not entitled to asylum in the EU.
Citizens of other Balkan countries - Albania, Bosnia, Macedonia, Montenegro and Serbia - have been able to travel without a visa in the Schengen zone since 2010.
"Kosovo has made great progress," Migration Commissioner Dimitris Avramopoulos told reporters on Wednesday, adding that he hoped national governments and the European Parliament would approve the proposal quickly.
Under the proposal, Kosovars with biometric passports would be able to enter the Schengen zone without a visa and stay for up to 90 days. The zone includes 22 of the 28 EU member states and several non-EU nations including Switzerland and Norway.
Kosovo, which has a population of 1.8 million, declared independence from Serbia in 2008.
Visa-free travel is very important for people of Kosovo. This step also will boost tourism in this new born destination.
at 4:21:00 AM No comments: