Kosovo: Harmony prevails in this corner of the Balkans

"Kosovo, the harmony prevails in this corner of Balkans. Now the tourism now is a prime objective. The trauma of the near past seems to inspire the Kosovars as they display the energy of a people that are fixed on a secure future". Here is how Peter Duncan, a founding member of The Natural Adventure Company (thenaturaladventure.com), which offers trips to Kosovo, describes the newborn destination in Balkans.

In its article published by The Independent he writes about the people's life and beautiful places in Kosovo which are restored and developed after the war:

" Now the country is at peace and, apart from the golden statues of war heroes, there is little to show of the destruction that took place – the minarets have been restored, and tourism is a prime objective. The concrete of communism has disappeared. In the university town of Peja, where the British used to come in their thousands when it was part of Yugoslavia, the streets are full of family life as the diaspora return for weddings and summer celebrations. The mountains and pastures are close by, and in this small landlocked nation, you can experience all the pleasures of a good hike and return to feast on fresh food that such proximity brings; my favorite dish is slightly hot yellow peppers with cream.In nearby Boge – its new houses with steeply-pitched roofs to cope with the winter snow – the talk is of an expanding ski resort. The trauma of the near past seems to inspire the Kosovars as they display the energy of a people that are fixed on a secure future. I had come primarily to trek in the mountains, and discovered that borders count for nothing when you are high up – you can dip into Albania and Montenegro while walking the peaks of the Balkans.
The chirping of the multi-coloured crickets, freshwater lakes, and free tastings of cheese and honey from hilltop farms, were enough to keep me happy. I imagined the life of an early hunter-gatherer as I gorged on wild strawberries and blueberries, which are often collected by locals to sell in the markets.  In a remote valley I met a man who was building a house on his inherited land. While he roasted root vegetables on his stove, he told me of his grandfather who, out of respect, would hide his axe from the tree he was intending to cut down. A harmonious connection to the natural world still prevails in these rural corners of the Balkans.

In the small town of Junik I slept in a kulla – a stone house – with intricately carved wooden ceilings. The mayor advised me to climb the highest mountain in Kosovo, Gjeravica, for its panoramic views. A Kosovan TV documentary crew decided they should follow me on my trek, with the hope that I might inspire others to do the same.

I reached the summit well before they did and only met up hours later as they hobbled into our rendezvous point. I'm still waiting for the premiere, but I do hope many others will visit this beautiful and abundant land...." 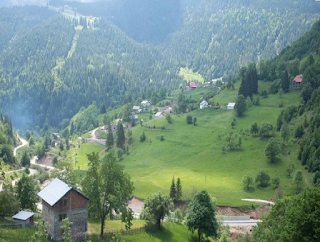 Here is the link: http://www.independent.co.uk/travel/news-and-advice/kosovo-harmony-prevails-in-this-corner-of-the-balkans-10499766.html